An original oil painting enhances every home. The still life shines a light on the natural things one might easily overlook, chestnuts, apples and such. Life seemingly captured in a moment. The subjects are timeless, but the interpretation is contemporary, my take on an age-old theme. 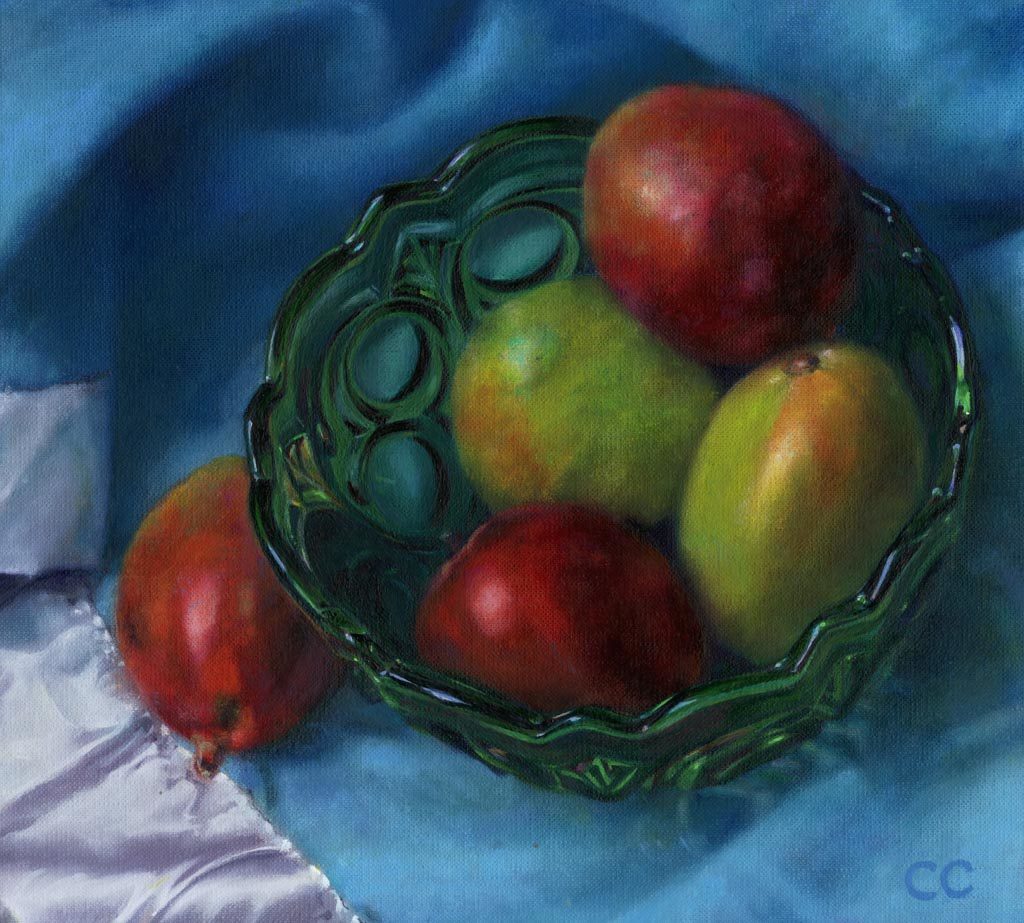 Darker than DecemberI painted this in January, under the soft light of a north facing window. The weather was terrible, the days dark, and I struggled to work but resisted lighting the scene artificially. I call it 'Darker Than December'. 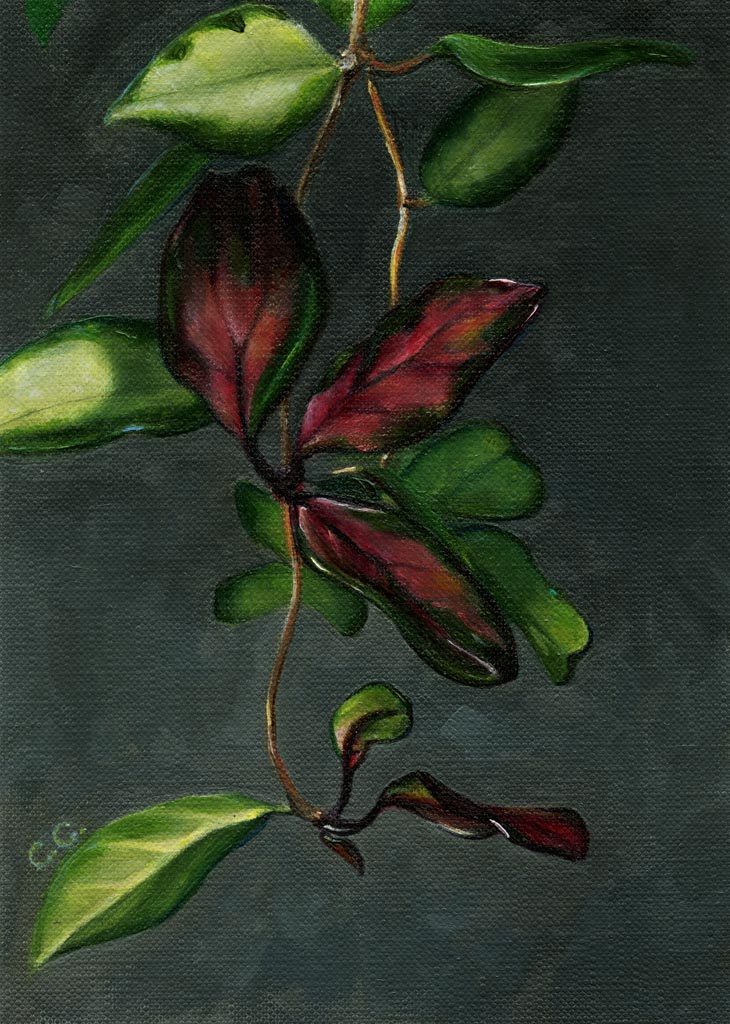 HoyaI waited for a long time for the hoya to flower but it never did. It's such a strange plant, each leaf has a very different form. 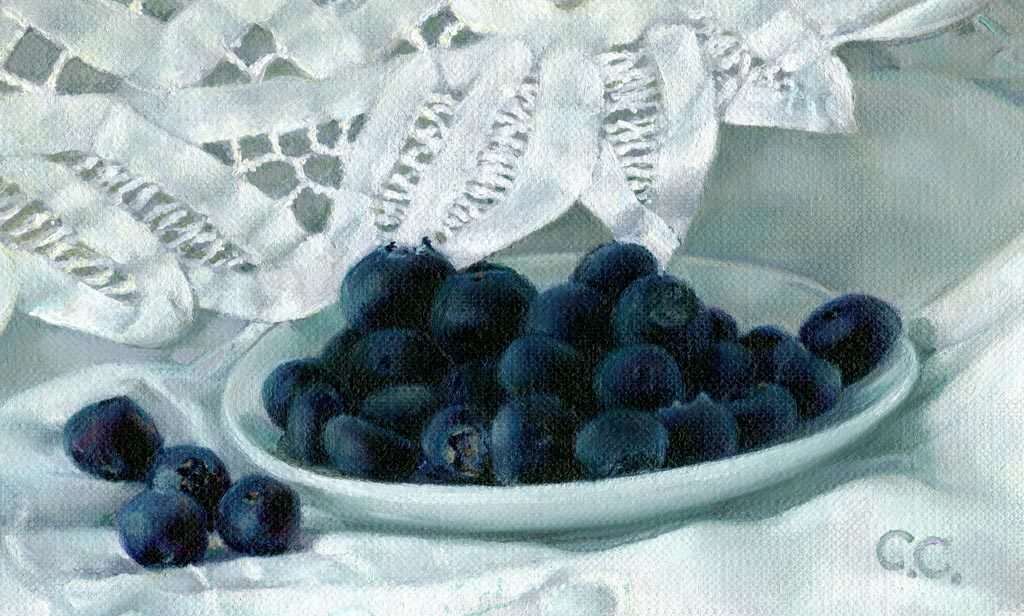 Blueberries in a White Dish with White ClothA study in Lace. 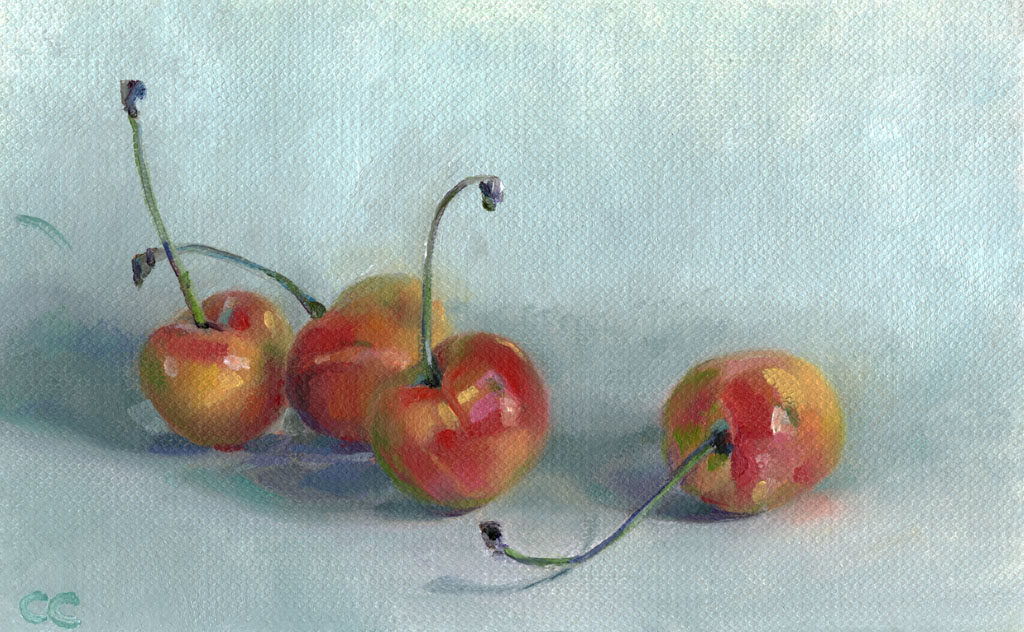 Rainier CherriesRanier Cherries have such translucent colouring for the short while when they are fresh. A picture of summer, they exude life and light. 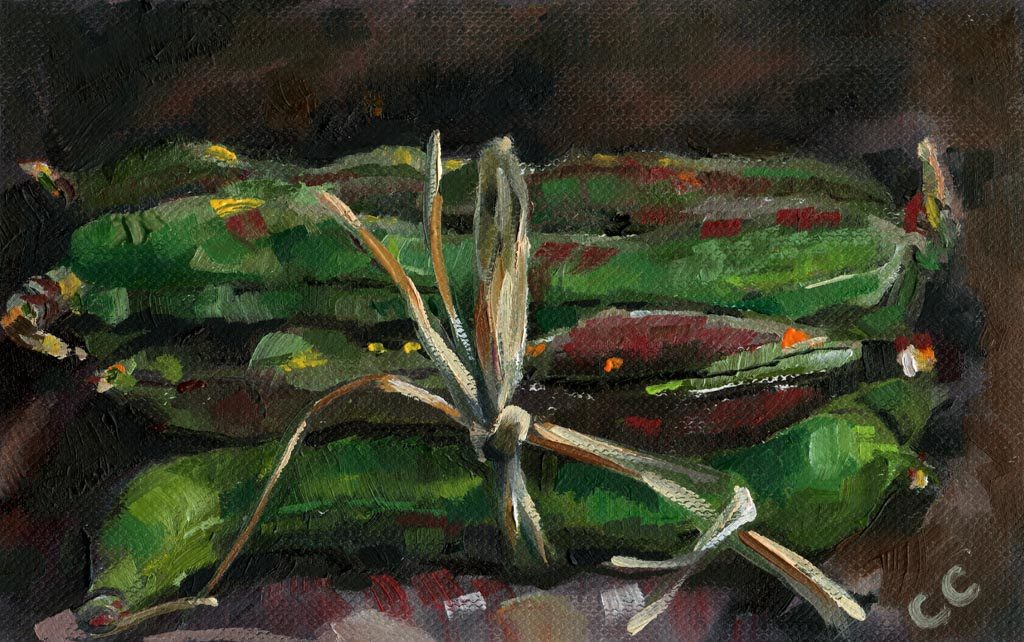 Broad Beans in RaffiaOn a parched summers day, beans went unsold on the farmers stall. They were very beautiful in their rustic elegance. I bought this small bunch and set about painting them just as soon as I got home. Fried beans for supper that night were delicious. 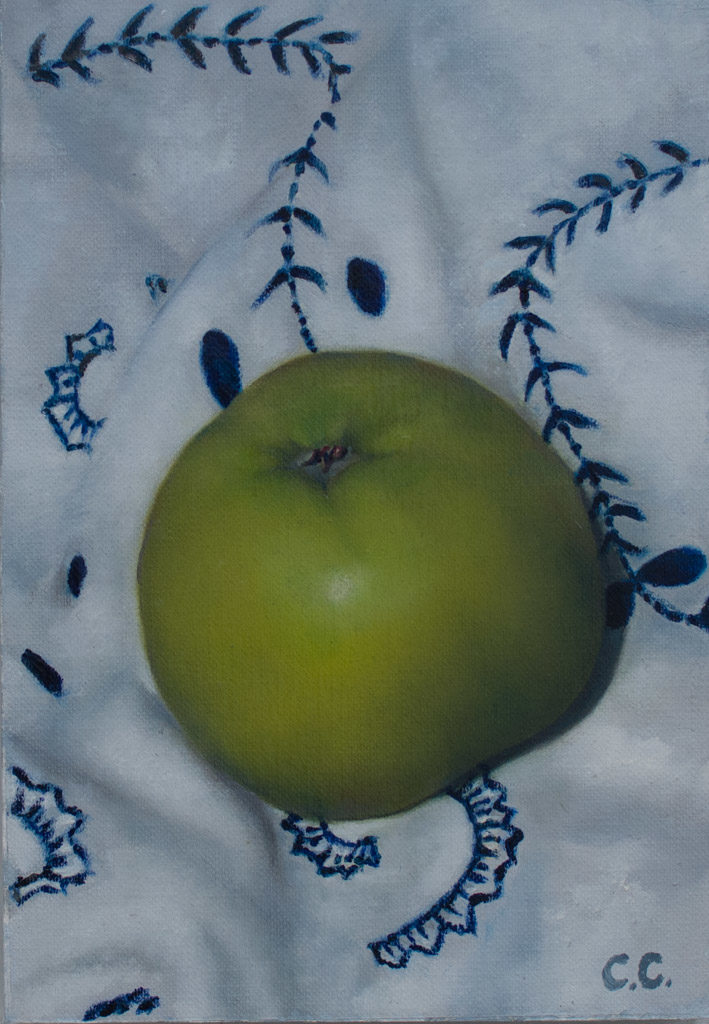 Bramley on White and Blue ClothThe glossy skin of the bramley makes it such a fascinating subject to paint. The weather was still cold when I finished this painting, I put the fruit outside & the blackbirds made quite a feast of it. 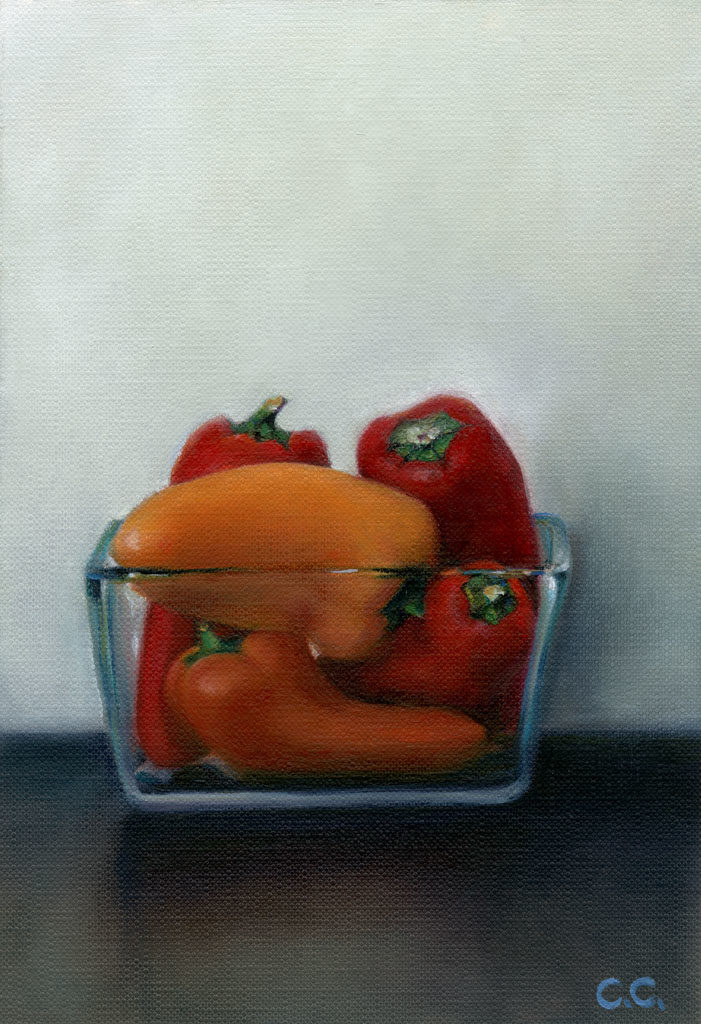 Peppers in GlassPainting glass holds great fascination to me. The shelf was slate. The way it deadened the reflections was fascinating.

Tomatoes on Brown PaperPainting natural forms in a crumpled brown paper setting creates wonderful muted color reflections, the lush reds, the blue light source, and then the long sepals of the tomatoes. They really were that long in life, they grabbed my attention when I saw them in the local grocery store. 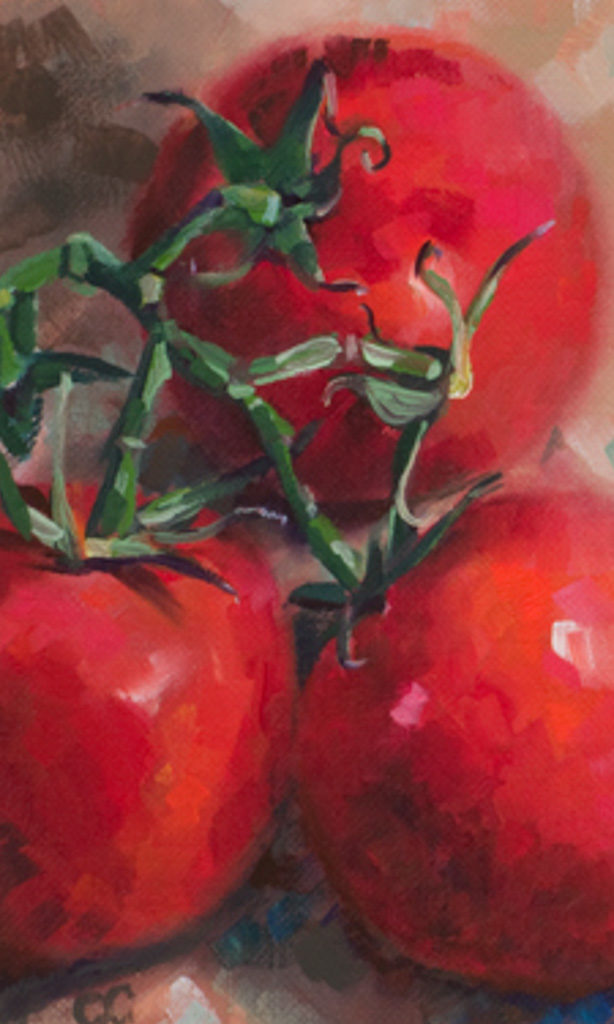 Three Tomatoes on Brown PaperI felt I was arranging the stalks and the light rather than cropping the tomatoes - the stalks were quite oriental in form.

Clementines in a RowI'd bought a lot of fruits that day: figs, satsumas, and pumpkins. Knowing they wouldn't last, I set them up and painted them simultaneously as separate compositions along the shelf. Daylight was a little too dark too, so I augmented it with a soft daylight studio light source. With the absence of sharp shadows, I was able to extend brushstrokes across the fruit and create gentle colour harmonies. 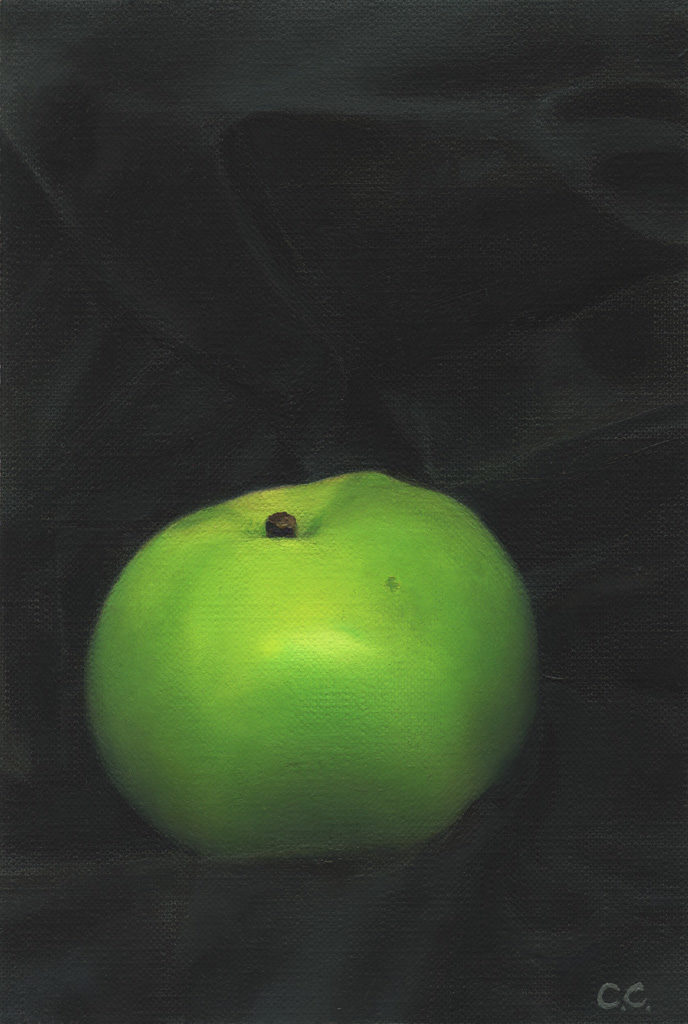 Bramley on Black TaffetaThe gloss of the fruit is beautiful to paint. 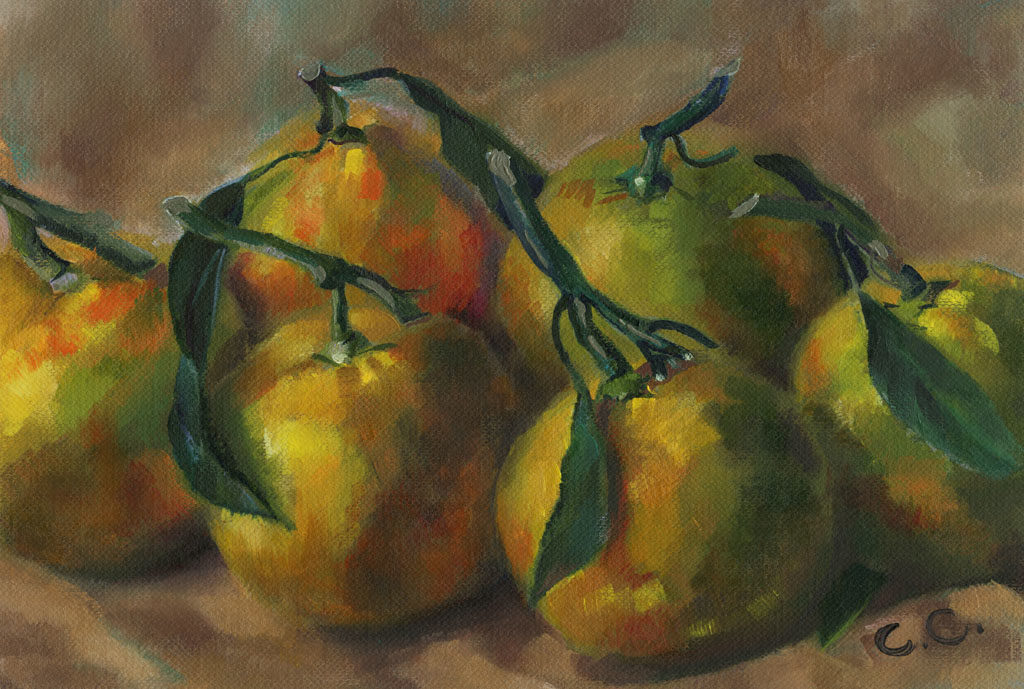 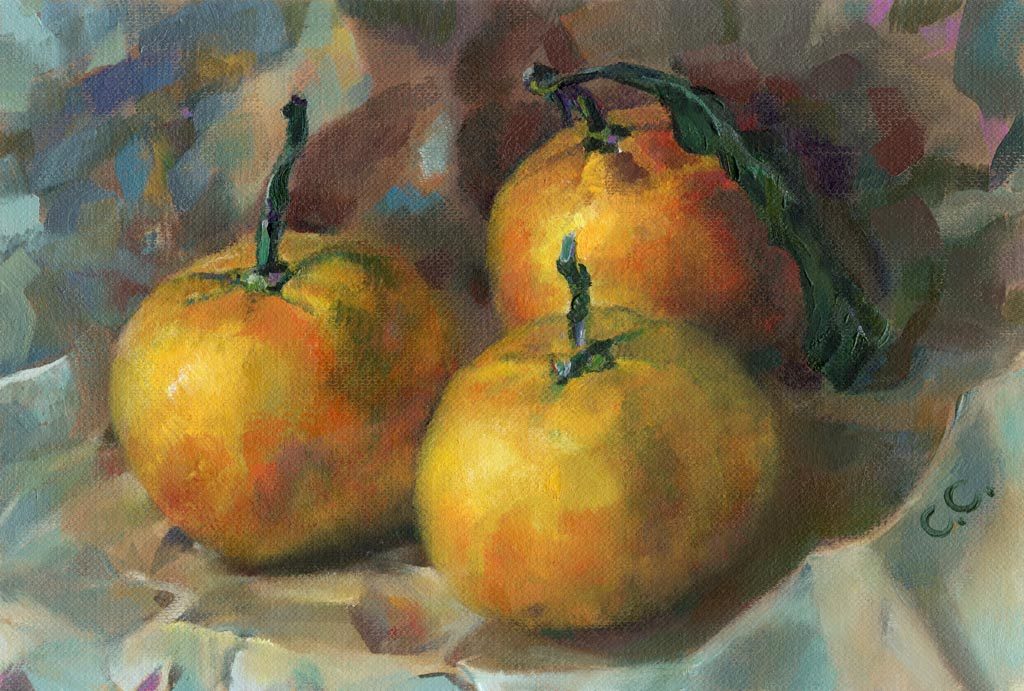 Three Clementines in Brown PaperBrown paper reflects the ambient light in unusual ways, so you can see blue reflections from the sky through the window & the warmer lights of the artificial lamp on opposite sides. 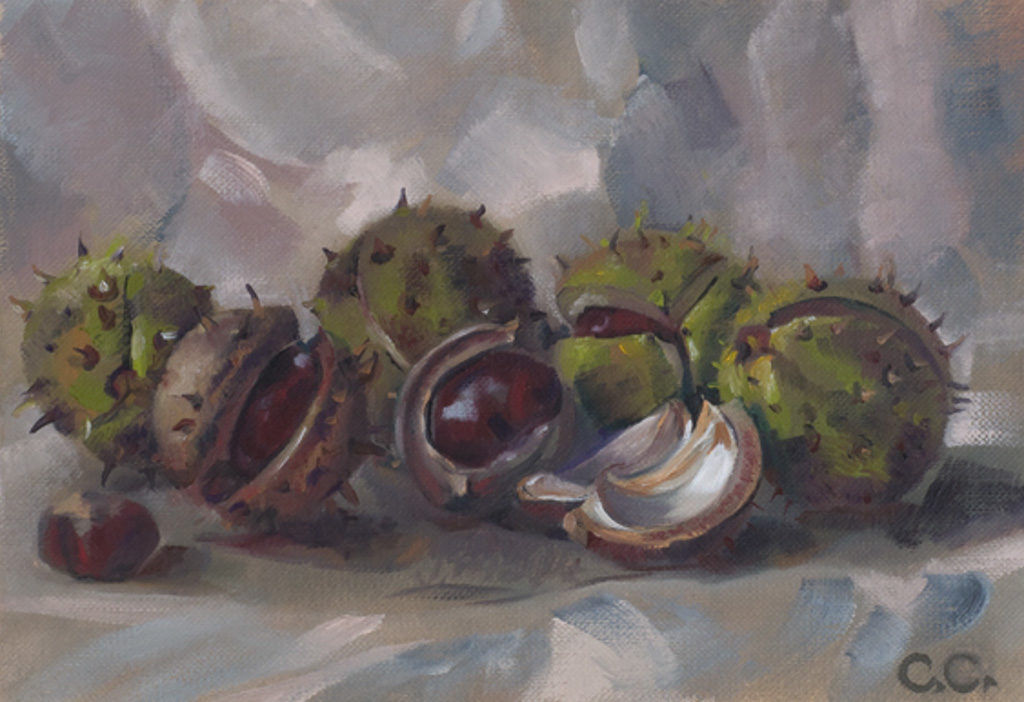 Chestnuts in Brown PaperI collected these chestnuts on a beautiful calm autumn day in Worplesdon, England. Large and chunky, they each had a little personality. Even over the first few minutes of bringing them inside to paint, the chestnuts expanded - and continued to do so ever so slowly as I painted them. I had to work fast to get the glow of the deep brown glossy skin & then I’d more time to work on the spikes and the greens & browns. 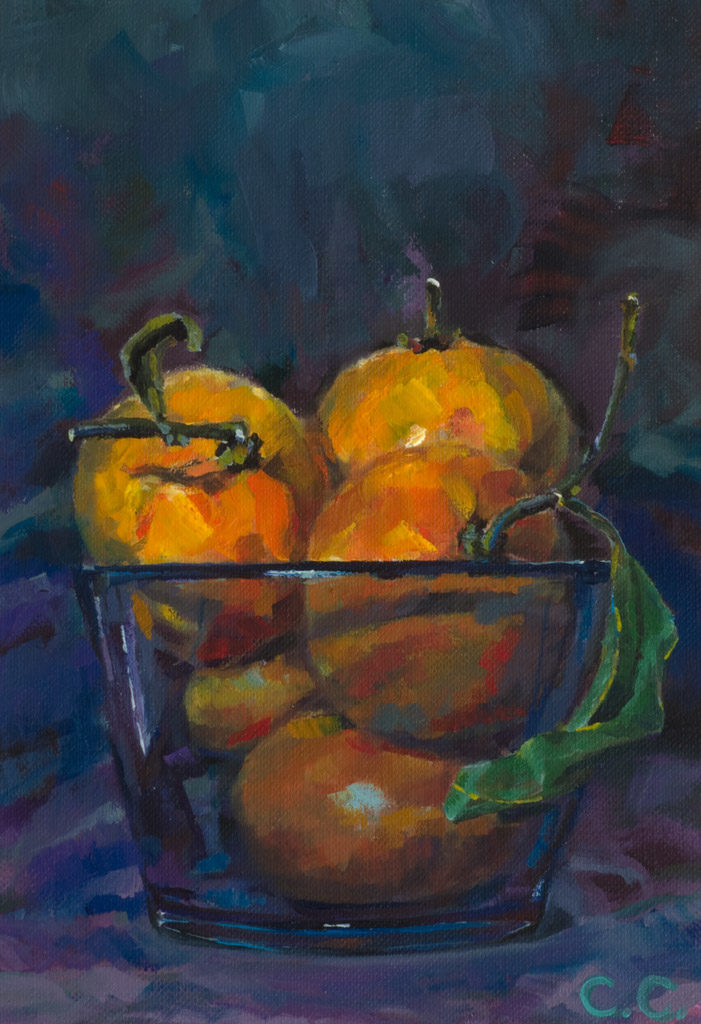 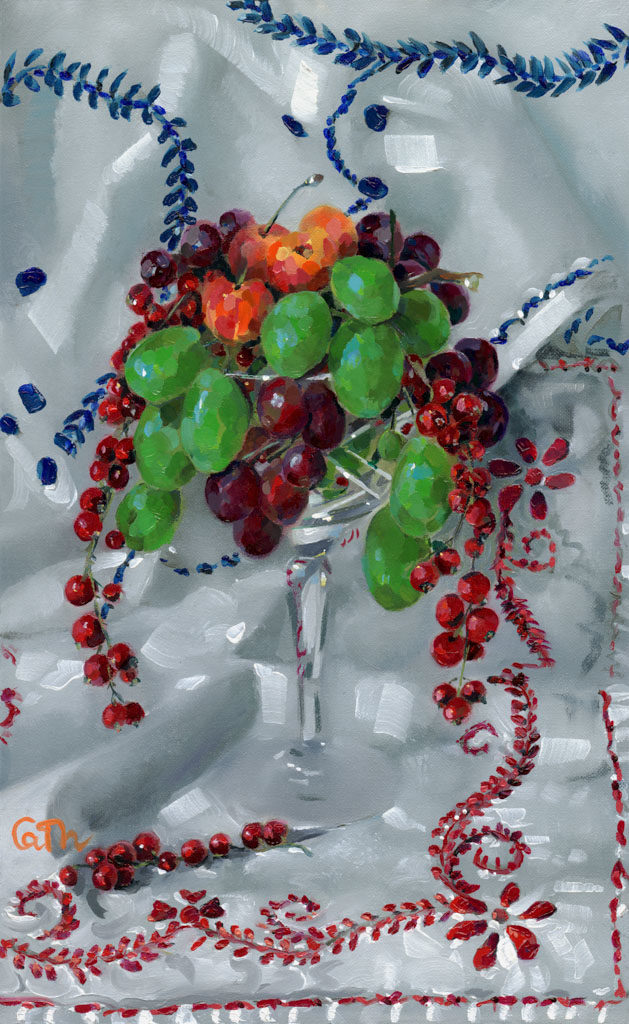 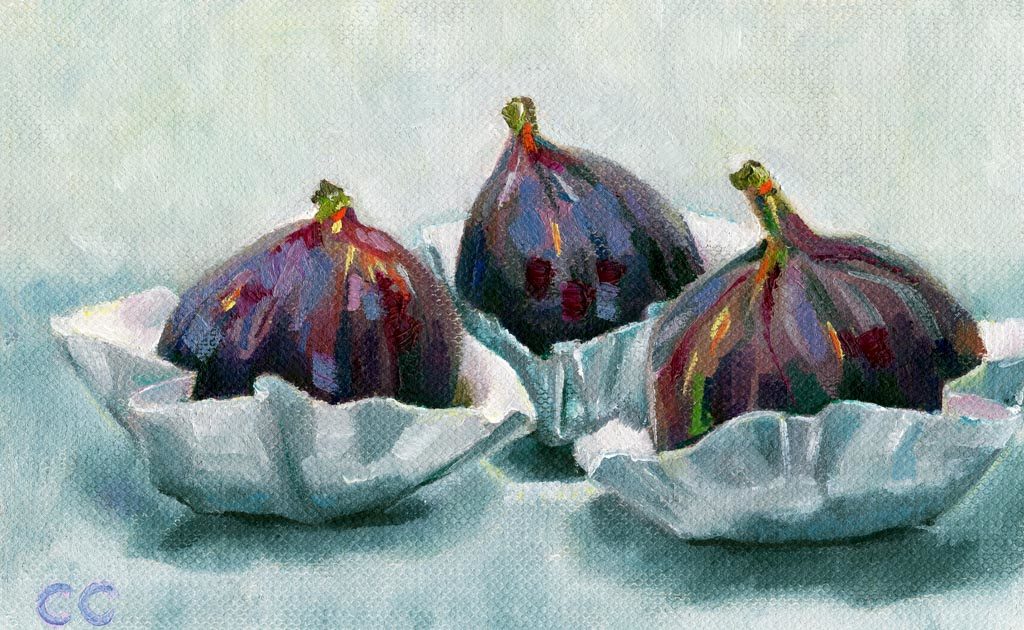 Three Figs in PapersThese figs appeared to have such personalities with their white paper skirts. 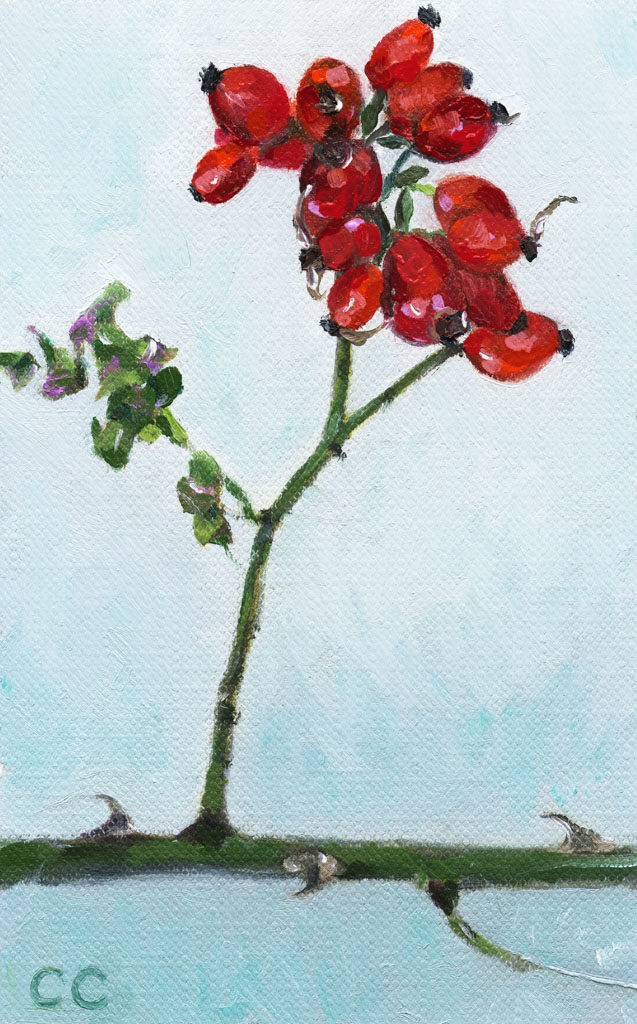 Worpledson Rose HipsThey were pruning the hedgerows in Merrist Wood the day we visited, so the hips were very fresh and plump. When I got back to painting, musicians Ben Folke Thomas and his friend Jack were recording in the next room to and I found myself painting to the lilt of the music. A memory of autumn and the beautiful fruits. https://fineartamerica.com/featured/worplesdon-rosehips-catherine-considine.html 13cm x 8cm. 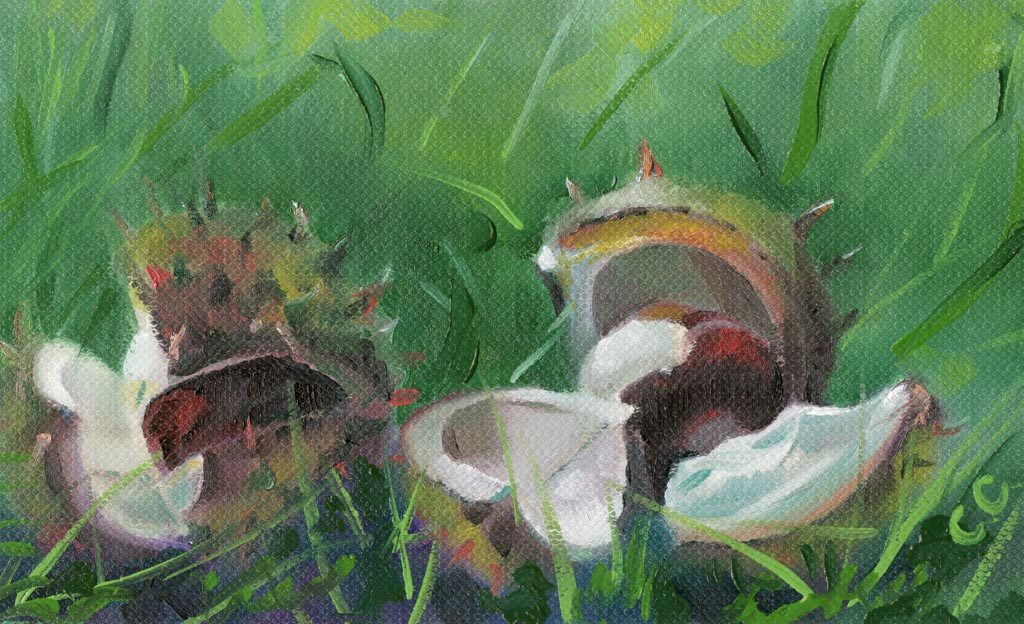 Finsbury Park ChestnutsI collected these chestnuts while out on a stroll in Finsbury Park, London, England. At home, I dug a sod of earth and put it on a tray to raise it and paint it from a bug's eye level. 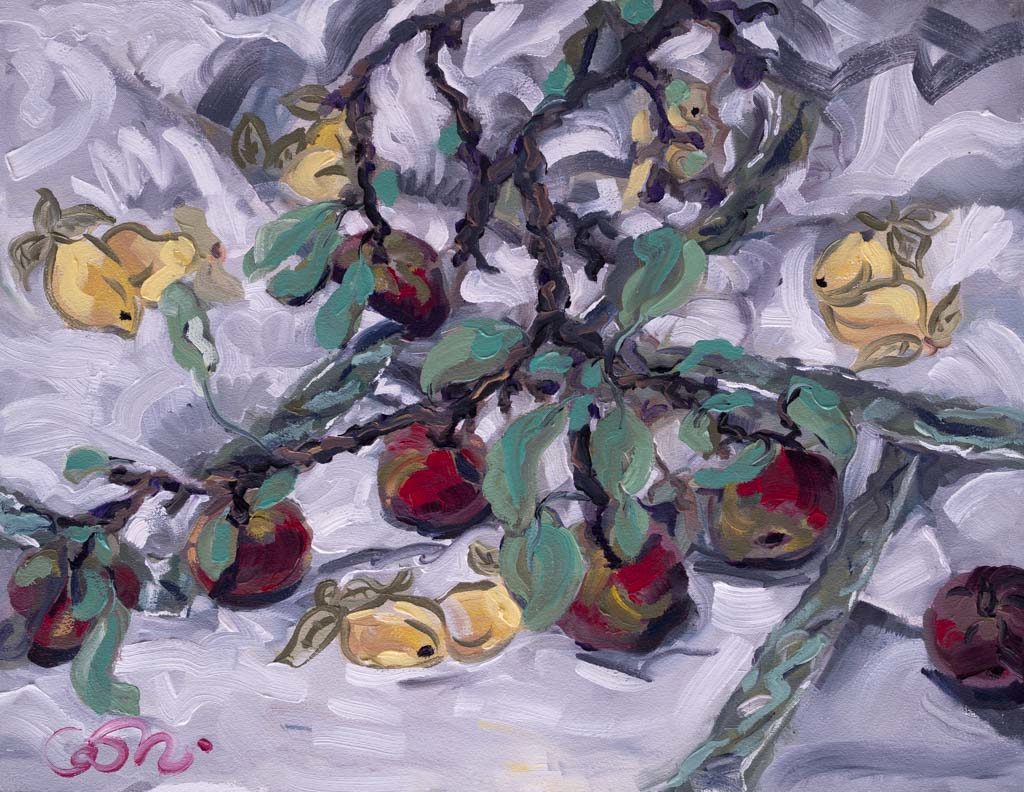 Apple Boughs on Crewl Embroideried Tablecloth12th of October 2017, I set up my easel in my sister Sheila's boutique and spent the day painting the apple boughs and talking to everyone who dropped by. 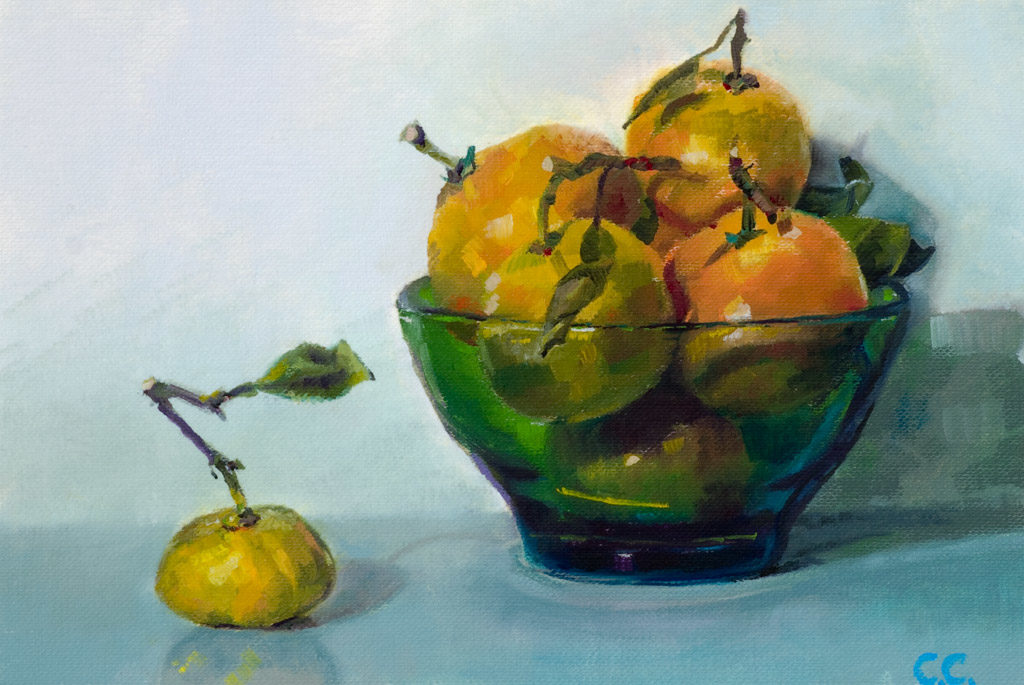 Clementines in a Green Glass BowlI painted 2 versions of this, one with just natural light, and then this one augmented by a daylight bulb. The glass seemed to come alive with the reflections. 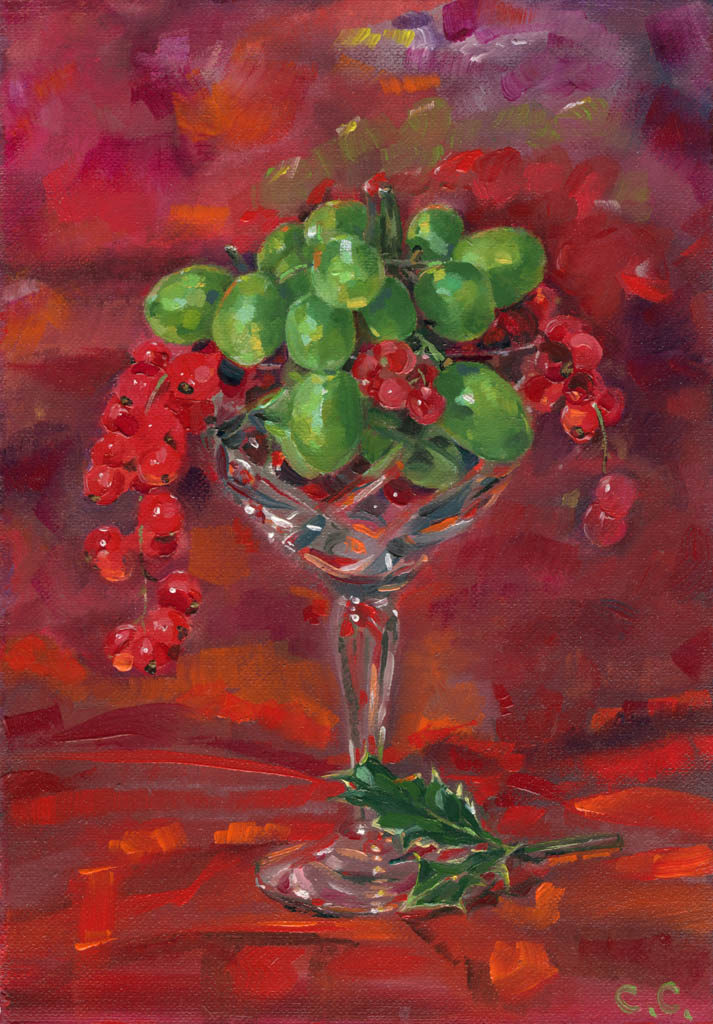 Grapes and Currants in GlassA painting for christmas, I set the goblet on metalic red gift wrap. 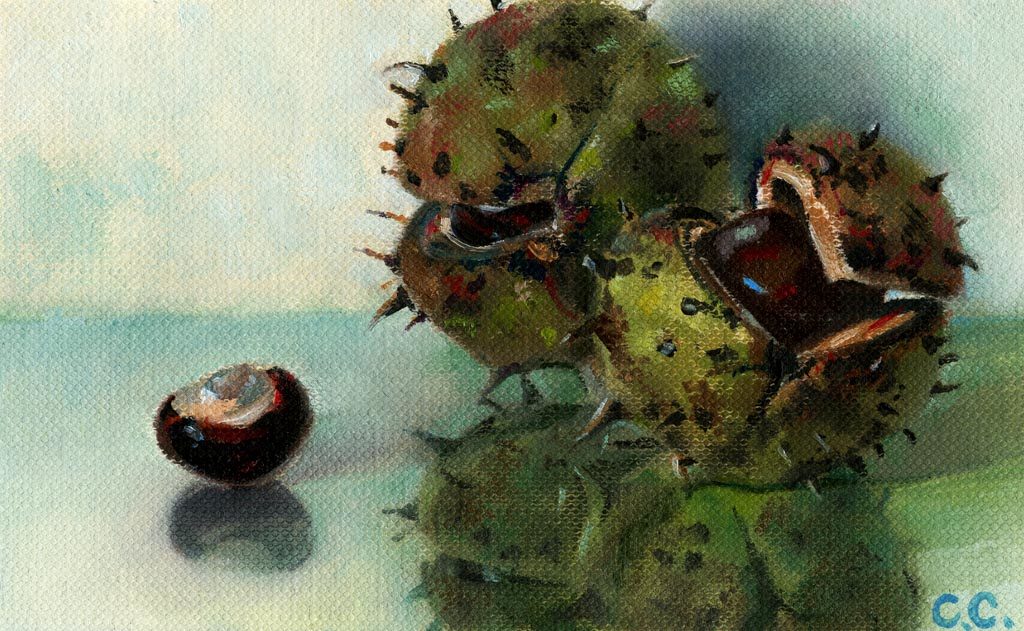 Worplesdon ChestnutsI collected these chestnuts on a walk in Worplesdon, Surrey, England, the spikes were really sharp and created interesting reflections on the shelf.

Where in the WorldSaturday morning, and the green grocers on my local street were out-doing each other with summer produce from all over the world. It's a regular market scene, but somehow on this day it seemed special, so the title came to me. This painting is available as a print from FineArtAmerica.com FineArtAmerica.com(opens in a new link - ships from US and EU). 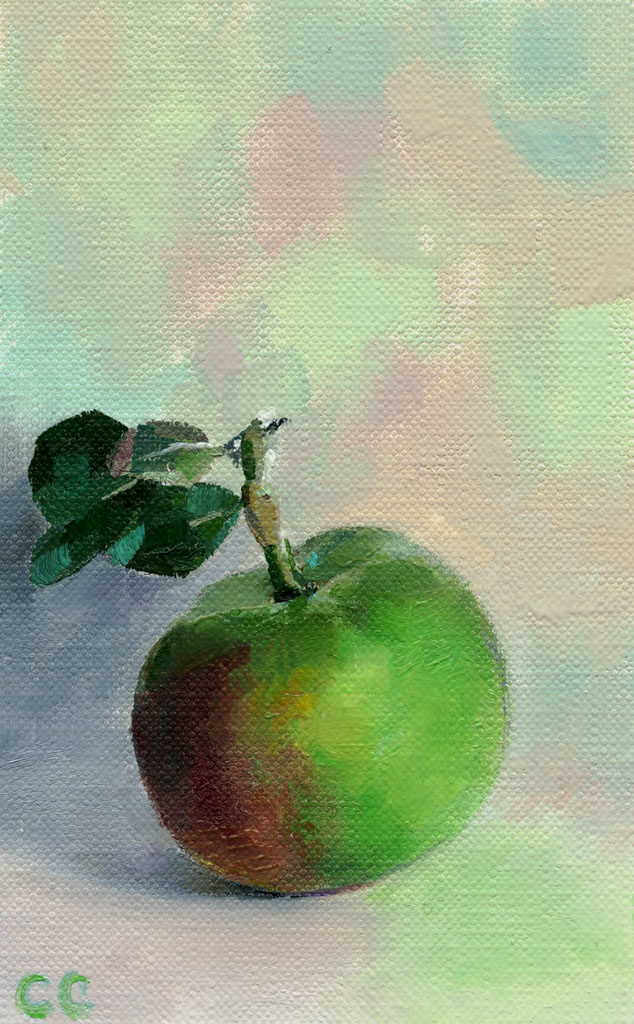 Kilkenny RoseThe Kilkenny Rose is a variety of tree growing in our little garden. Each year I get a couple of fruits if I’m lucky and get there before the squirrel. The taste, just like the flower, is delicate. 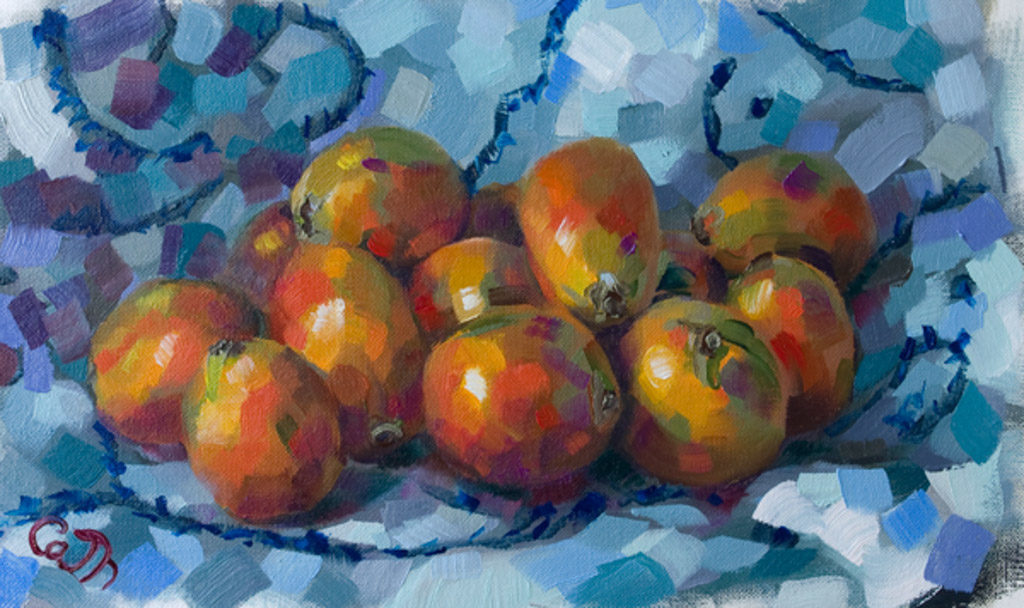 Spanish Kumquats on ClothThese Kumquats were a joy to paint. I confess the cloth was actually blue and white, but as I was painting I liked the blue shadows that had formed so much I didn't want to add white. 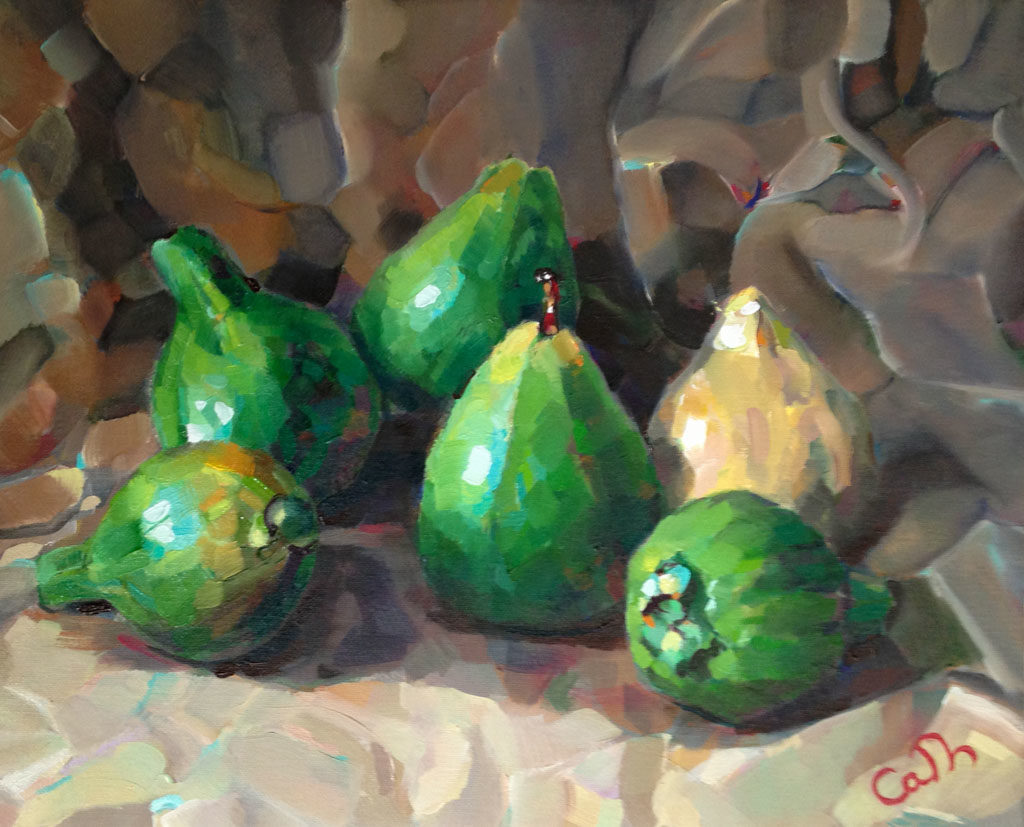 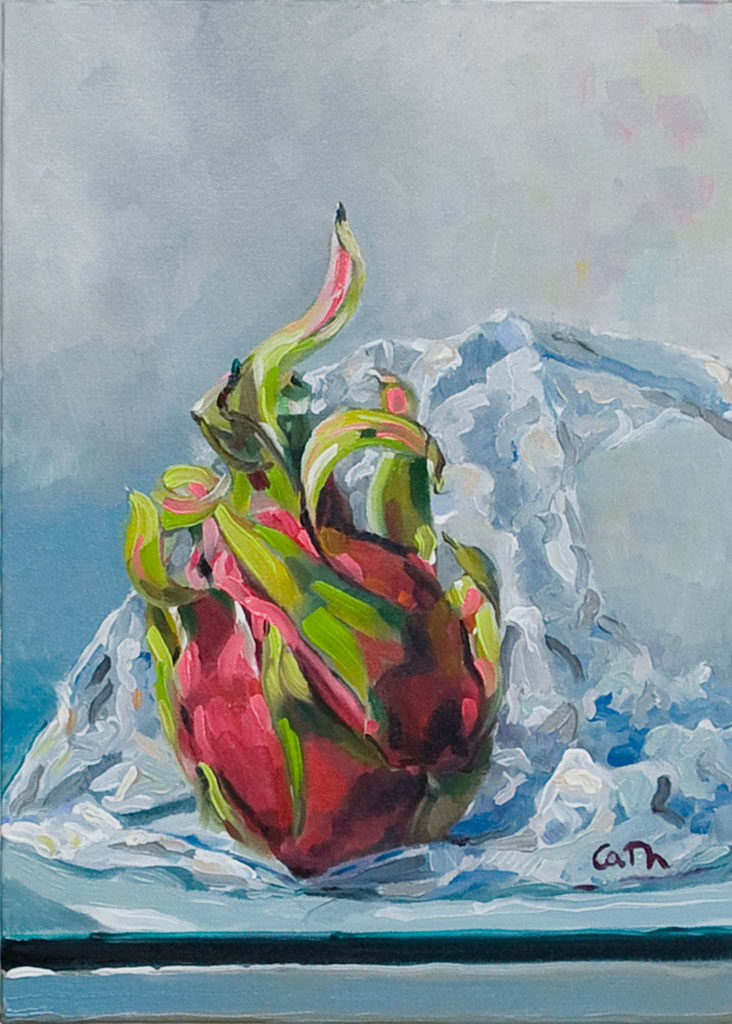 Dragon Fruit in PolytheneI'd never seen a dragon fruit before & they are extrordinary and great to paint. 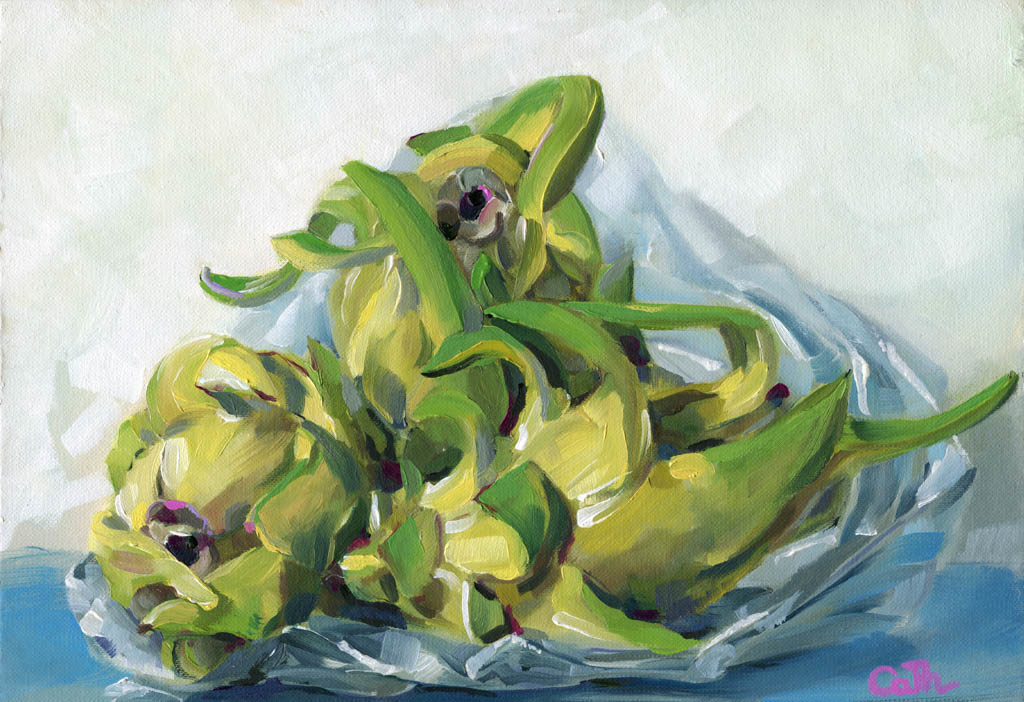 Three Dragon Fruit in PolytheneI call this my entangled dragons with their tentacles waving about. Three green dragon fruit in a polythene bag, on a blue glass shelf.

Pumpkins in a RowI came across these pumpkins at halloween, they had beautiful colours and strong chunky forms, I just had to paint them.

Strawberries in a RowI love painting reflections and light, ample excuses for both with these jumbo strawberries and they were so delicious this was my second time painting this composition, with fresh strawberries of course, and ate those too after. 355mm x 116mm

Brussels Sprouts on the StemWhen I saw the stalks of brussels sprout in the local market, I knew I had to paint one - life sized. It's dark, like when you collect vegetables from the field into a shed. Now what I'm really looking forward to is getting an opportunity to paint them out in the field - en masse.

Strawberries in a RowI love painting reflections and light, ample excuses for both with these jumbo strawberries and they were so delicious I got more, painted another version, and ate those too. 355mm x 116mm. https://fineartamerica.com/featured/strawberries-in-a-row-catherine-considine.html 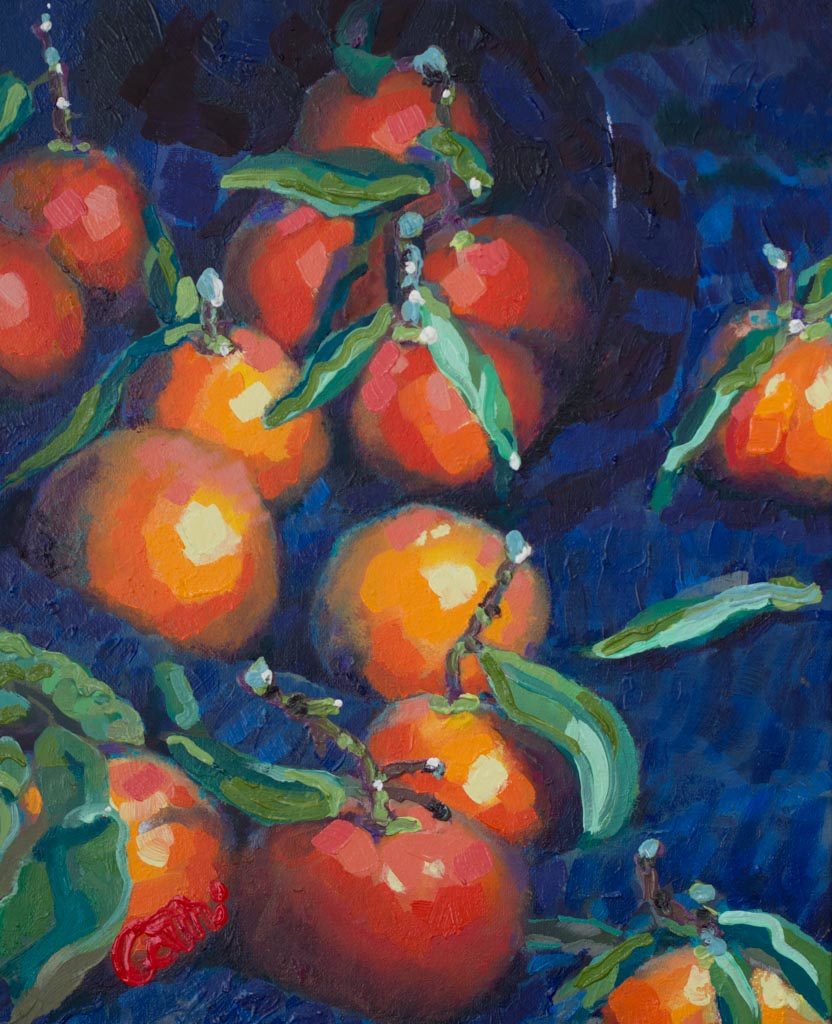 Clementines and Blue Glass Bowl on Blue ClothThis was going to be a simple painting of the blue glass bowl & the fruit, but when the glass fell over & the clementines tumbled out, it looked just right. 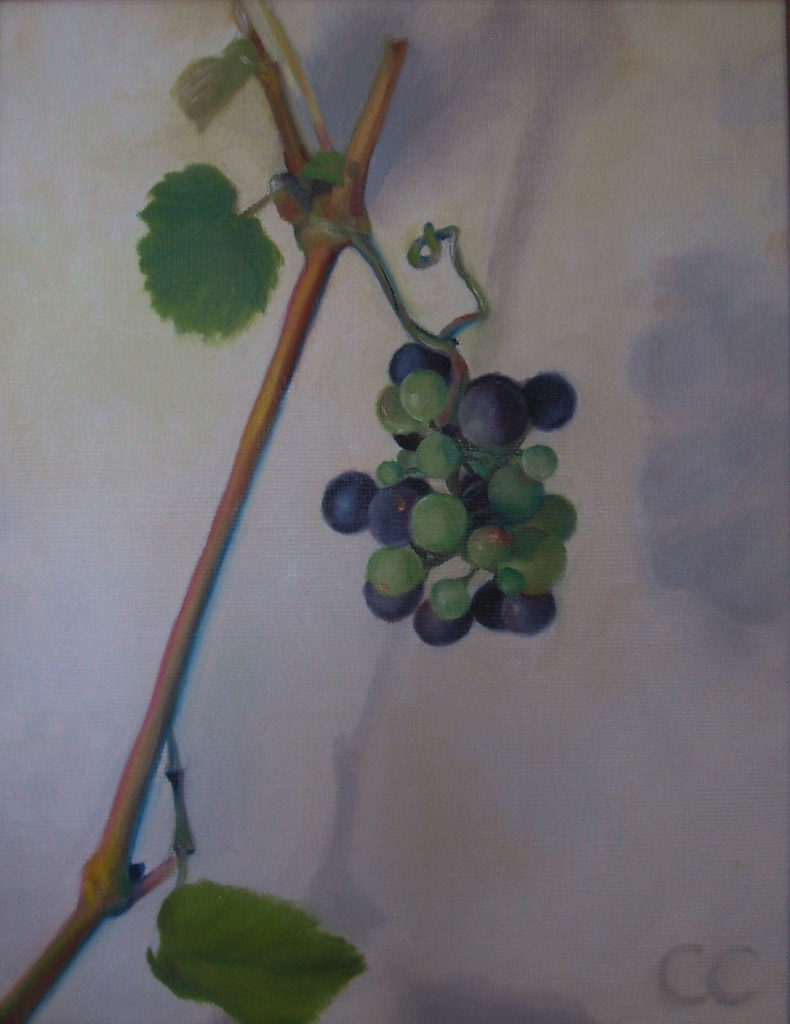 Grapes on the VineI cut this branch from the vine and brought it inside - to simplify the backgroune mostly. The jar of water I put it in was more than it was getting outside and the leaves grew as fast i could put the paint down it seemed.
Love Art

Any cookies that may not be particularly necessary for the website to function and is used specifically to collect user personal data via analytics, ads, other embedded contents are termed as non-necessary cookies. It is mandatory to procure user consent prior to running these cookies on your website.