A nice bit of December sunshine helps on varnishing day.

Joe Sweeney, from Burtonport, Co. Donegal, was my uncle’s father. He was in the GPO in 1916. I wanted to contribute to the 2016 commemorations in a meaningful way – I’m very thankful my uncle and cousins gave me his photo to enable me to paint this portrait – happy too they approve the result.

I knew his skin tone and hair was like my cousin’s, and they tell me his eyes were blue. There is a previous portrait which was enormously helpful too.

As it was a black & white photo I was working from, I chose the colour palette for the clothes.

With green tie, gold collar button & white shirt, he is wearing the tricolour.

The tie was smaller in reality as was the fashion, I’ve made it larger for dramatic effect. I chose to depict the suit more chunky than it was too, to give the appearance of thick Donegal tweed.

The photo I worked from was taken around the time of the first Dáil, he would have been in his early twenties.

Here’s a link to the Donegal Daily with more information (0pens in a new window). http://www.donegaldaily.com/2016/03/09/rosses-community-school-to-honour-easter-rising-hero-joe-sweeney/

Mary – I’m hoping you’ll stop by some day, here’s the portrait sketch – I’m so looking forward to seeing your sketch of me.

I met Mary, an artist who was visiting Gallarus Oratory. We took each others photo with a view to doing a sketch. I think she was from Canada, but I may not be remembering quite right. She works with charcoal mostly. I did my sketch in Pan Pastel on tinted paper.

Lately I’ve been concentrating on portraits trying to consolidate my ideas & figure out the practical side of things. Using a different medium too for working out the layout and colours. Pan Pastels are great to work loosely with – you apply with a foam tipped little plastic knife.

END_OF_DOCUMENT_TOKEN_TO_BE_REPLACED 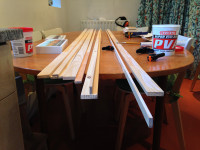 My frames are essentially the same, but each time I make them, the process gets modified – mostly from being influenced by conversations with friends and collectors. This time I’m pre-forming the narrow gutter around the painting by gluing lengths of pine strip-wood together.

END_OF_DOCUMENT_TOKEN_TO_BE_REPLACED

My frames are essentially the same, but each time I make them, the process gets modified – mostly from being influenced by conversations with friends and collectors. This time I’m pre-forming the narrow gutter around the painting by gluing lengths of pine strip-wood together.

Any cookies that may not be particularly necessary for the website to function and is used specifically to collect user personal data via analytics, ads, other embedded contents are termed as non-necessary cookies. It is mandatory to procure user consent prior to running these cookies on your website.